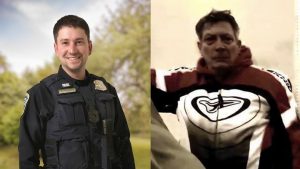 As recounted in stories by the Huffington Post and Washington Post, GWPLLC Attorney David P. Weber has worked tirelessly to identify the assailants of deceased Washington, DC, Police Officer Jeffrey L. Smith.  Weber, an attorney, certified fraud examiner, and private investigator, teamed up with open-source intelligence group DeepStateDogs, to meticulously scour the internet and social media websites.  They called themselves #TeamJeff.  On Thursday evening, #TeamJeff found what they had been searching for for 44 days and nights:  video of the attack on Officer Smith.

Using old school detective work, and modern data analysis, in the span of 36 hours, both suspects were conclusively identified.  Evidence was turned over to the FBI and Metropolitan Police, and GWPLLC has now sued both assailants for wrongful death, assault & battery, and aiding and abetting.

You can view the federal lawsuit against the defendants  here: 2-main.

You can view Exhibits A and B to the lawsuit here.

As Weber stated to the Washington Post, “it shouldn’t take a forensics professor on summer break to do the government’s work.”